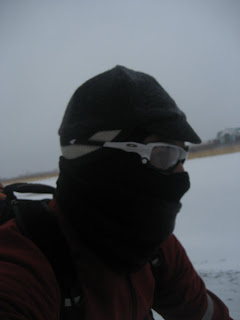 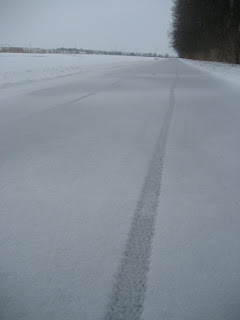 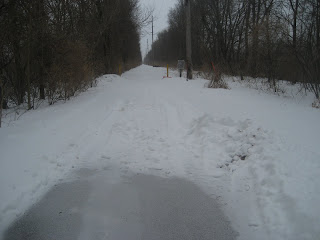 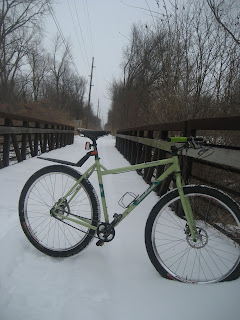 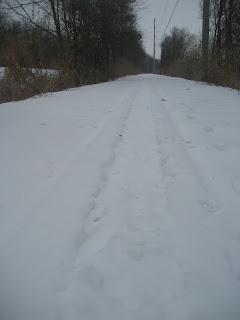 Monday I braved temperatures in the teens to commute to work. Not knowing how the trail conditions were after the blizzard I ventured out anyway. The trail was good for the first 6 miles, a layer of ice was covered by a thin layer of snow so the trail was still very slick and I couldn't ride too fast. I got about 6 miles from work and the plowed trail just stopped. There were sled-neck trails on the 12" of snow so I was able to ride for about 2-3 more miles on those. Soon the snowmobile trails faded and I was reduced to walking....3-4 total miles of walking. I was a little frustrated when I showed up to work just as I was to open the shop up, showered, looked in my bag and forgot my pants at home so I had to wear some baggy cycling shorts from the shop. Called the village of chatham and asked if they were going to plow the trail....no response. My boss Matt called them again later in the day and they said they had a broken plow but were planning on plowing the trail with a tractor. I took the long way home down curran road through the country with 15-20 mph head/cross-winds. This was a good 2 hour ride that gave me a feeling of isolation I am no doubt to be expecting come trans iowa...so it was a blessing to have done this ride. Many cars slowed and I'm sure were wondering what the hell a cyclist was doing out at night in such bad weather...the answer was simple...getting home...ended the day with 3.5 hours of commuting time and 35 miles. Woke up today to -15 degree wind chills, braved the weather and got on the bike. Glasses iced over immediately and eventually I just took them off. I was going to take the trail most of the way and then ride the road to work....to my surprise I found that they plowed the trail this morning, how nice! Well this was a blessing and a curse because it was plowed but it was sheer ice. I wiped out on the ice pretty hard and hit my wrist pretty bad, traction was horrible and tried to ride in the snow as much as possible. I left early to allow for bad trail conditions and I am glad I did, I imagine I was crawling at 5-7 mph on the ice. I saw the plow and tractor that had previously plowed the trail, I waved at them and thanked them and hoped that they felt a sense of pride that someone was actually using the trail that they had worked so hard to plow. About 3 miles from work, I losts feeling in my fingers. My toes and the rest of my body were warm, I had chemical warmers on the toes but not on my hands (dumb decision...or lack there of), tried moving the fingers as much as possible and as soon as the ice cleared i sprinted as hard as i could to the shop. Could barely open the door and my hands hurt so bad....immediately ran them under hot water and my hands were in pain! I imagine this is the closest I have come to frostbite before. Glad I got to ride in this morning but if it doesn't warm up I might need to look for a ride home considering I will be riding with a cross-wind or head-wind the whole way home. Hopefully the thaw comes soon and this nasty weather breaks. Happy Tuesday....don't let your meat loaf! 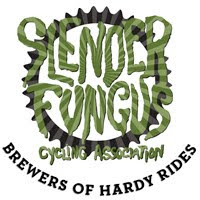 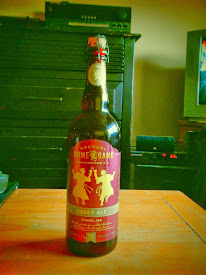